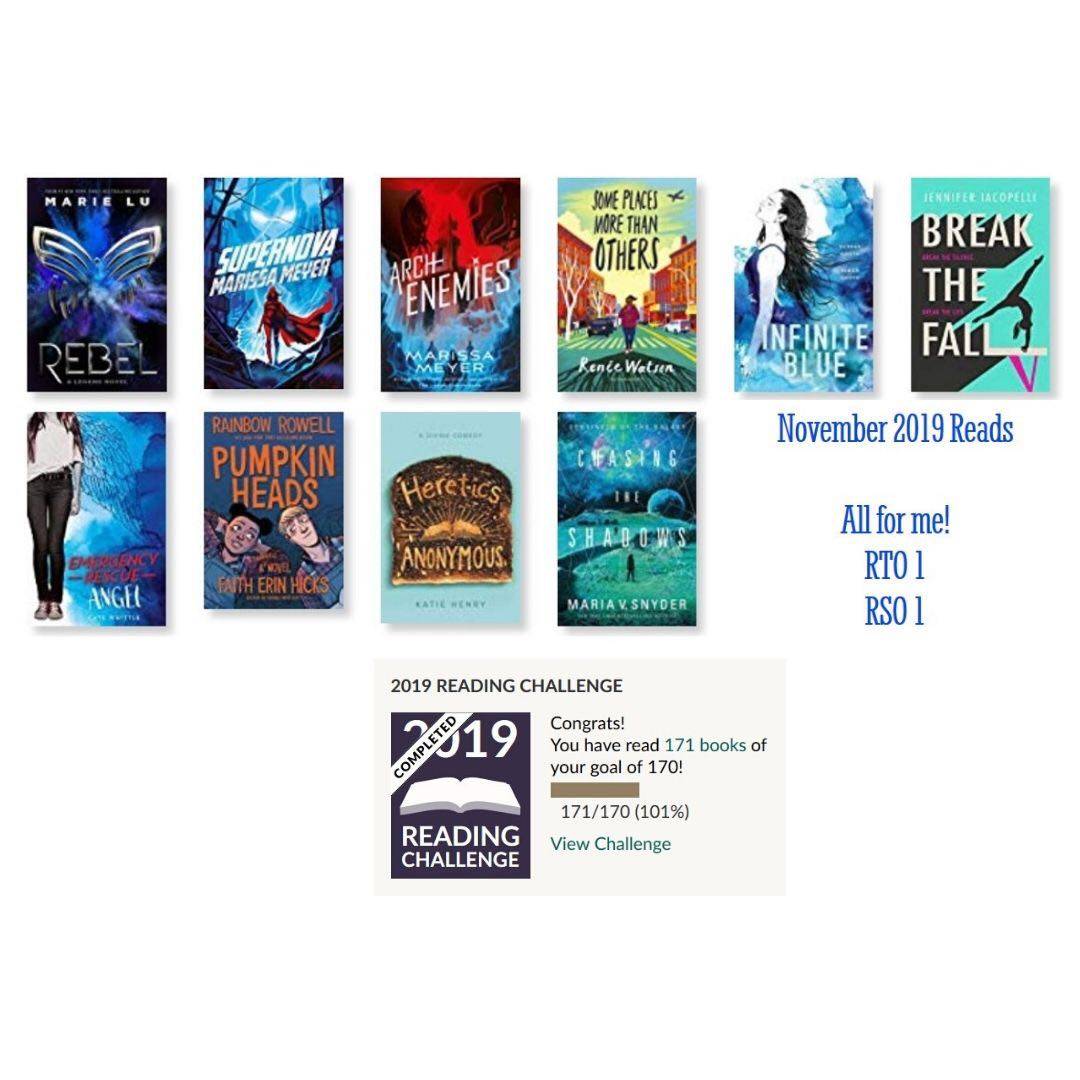 First of December here in 🇦🇺. Pretty poor month for me. Not sure what happened. Just lost my YA way I think. Sometimes it‘s good to take a break, or catch a breath, or something. I neglected to mention that ‘Chasing the Shadows was a Netgalley read. #novreadingstats #grchallenge Image from #goodreads

Riveted_Reader_Melissa Looks good to me, and congratulations on your Goodreads challenge. 2mo
26 likes1 comment 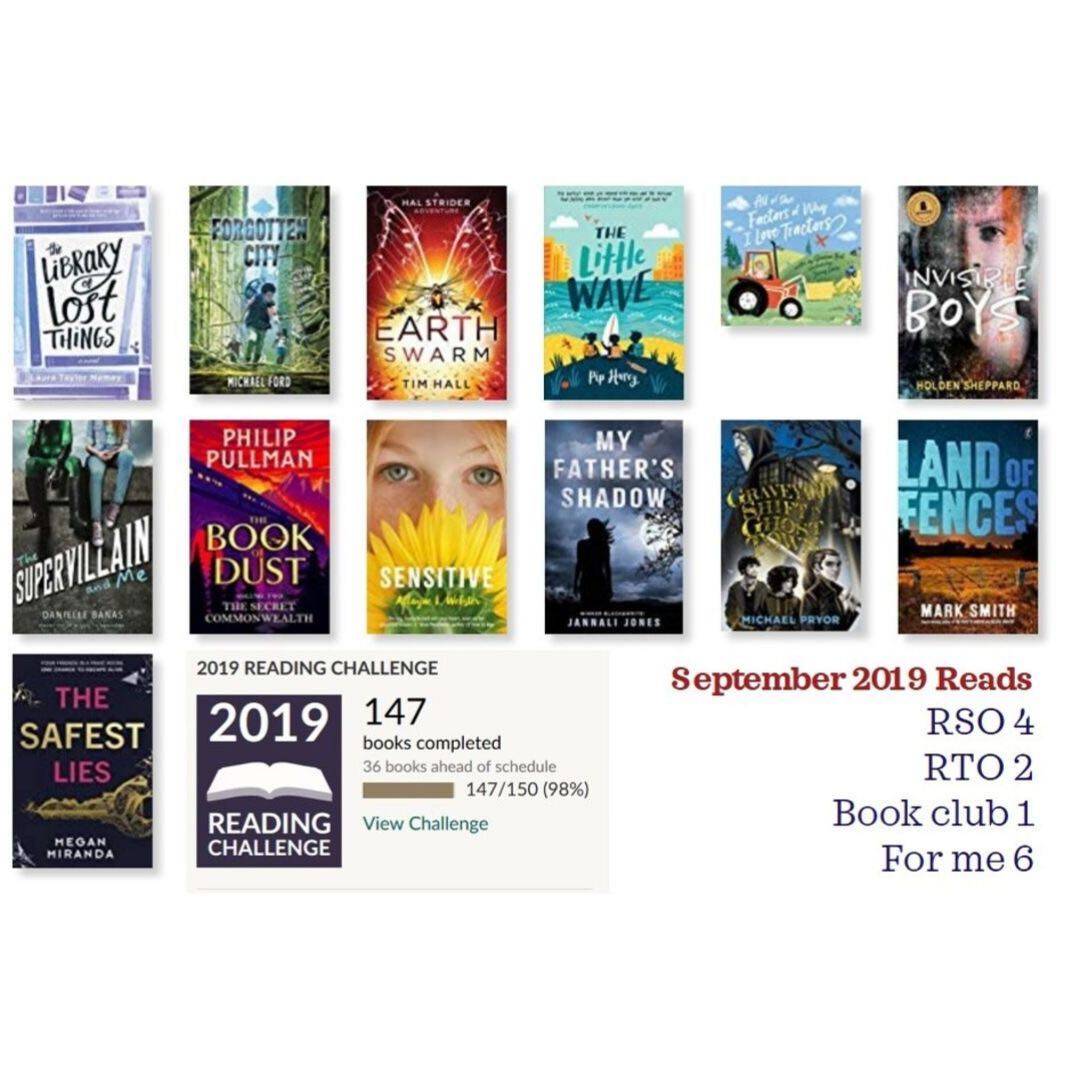 Add in #waywardson coz I read that yesterday. #readingstats September 2019. Plus #grchallenge lots of great books here.

Missusb
The Rest of the Story | Sarah Dessen

Man, it‘s been a busy start back to term 2. Here finally are my reading stats for April. #readingstats #grchallenge #april2019

A brief March wrap-up and check in for all of my #readingchallenges! My favorite book of the month is tagged.

Also participating in #seriesread, but I haven‘t tallied those yet, other than knowing I fully completed two series so far this year:

Only 14 this month. But that‘s ok. Tracking well with #grchallenge #readingstats #februaryreads loved most of them.

1. My sis and her boyfriend (see 3)
2. #booked2019 #pop19 #GRchallenge #nonfiction2019 and catching up on a few series.
3. Best: I made a major change, transitioning from sahm to starting a life coaching business and don‘t regret it yet! 😂 Worst: losing my sister‘s long-term boyfriend. After 7 yrs clean, he died of an opiate overdose last spring. No one knew he had relapsed. 😢
4. Intention: Gratitude
5. First one started in 2019

5/5 stars ⭐️⭐️⭐️⭐️⭐️ I was already a big HRC supporter, but now I admire her even more. The crap she has had to endure during her career is ridiculous, and as a woman attorney in the male-dominated legal profession, I could relate. I learned more about the Russian political inference that occurred in the 2016 election and it did a great job of showing HRC‘s personal side. It was hard to read without tearing up, but ultimately it was worth it.

Jess7 Book 18 of #GoodreadsChallenge #jpbookreview #bookreview #mustread #HRC #fivestarreview #goodreads #grchallenge #politics #democrat #proudfeminist #feminist #feminism #womensrights #humanrights #politicalbooks (edited) 2y
MelissaSue81 I want to love this book. I really do.. I‘m just having a hard time with it. 2y
Jess7 How far in are you? Reading or listening to it? @MelissaSue81 2y
See All 7 Comments
MelissaSue81 Listening. Just started hour 9, so a little over halfway. 2y
Jess7 If the emails stuff is weighing you down, skip it and come back to it. The chapters are labeled so you should be able to skip around. @MelissaSue81 - The parts about her emails was annoying, but I think she did a good job at explaining some of the misconception about them well. I found the Russian investigation stuff heavy and maddening, but really interesting.. maybe skip to that. 2y
RaimeyGallant Come on, library hold! 2y
Jess7 #thegreeneyedreader 1y
103 likes1 stack add7 comments

OKAY LITTENS, are you doing the #grchallenge ? I want to follow you and support your challenge there as well as here! You can either find me, or leave your names and I'll find you. https://www.goodreads.com/user/show/4205963-rachel-kulik is my profile for easy finding :)

If you post your profile on your page tag me so I can still find you!

Marchpane I'm Marchpane there too! 3y
lilycobalt I'm lilycobalt there. 3y
maximoffs @Marchpane @lilycobalt I've added both of you! 3y
See All 37 Comments
Krisjericho I'm Kris Wood on there. 3y
maximoffs @Krisjericho I think I just added you. If your profile is private I did for sure! 3y
Sjo_m I'm sjo_m on GR (Jo in 'real life')! 3y
MatildaBaggins I'm Lori McClurg on there😊 3y
maximoffs @MatildaBaggins got you! @Sjo_m I CAN'T FIND YOU. I fail I think 😂 3y
Krisjericho @steverogers I'm not private on there. :) I don't see a request. I'll try to look you up when I'm on an actual computer later. The mobile site is so bad for looking people up. 3y
RanaElizabeth I'm RanaElizabeth on there too. 3y
maximoffs @Krisjericho I couldn't even figure out how to do it on the mobile site I was using Google 😂😂😂 3y
maximoffs @RanaElizabeth just got your request! 3y
RanaElizabeth @steverogers My fingers are fast on the draw! 3y
Sjo_m @steverogers I'm still new to Goodreads but think I've found and added you! :o) 3y
maximoffs @Sjo_m got you!!! I've added you :) 3y
LauraBeth I tried sending a request but I got an error message, then a success message and then another error message ☹️ 3y
maximoffs @LauraBeth I got your request! I accepted it 😊 3y
erinreads Ooh, add me! I'm erinkharv there. 😎 3y
maximoffs Added you @erinreads ! 3y
Robothugs I'm Goodreads.com/robothugs 😊. I get an error when I try your link 🤔 (edited) 3y
maximoffs @Robothugs I get an error when I try yours! I'll try once I'm back to my laptop 3y
Robothugs Maybe we both need a computer for the links to work 😂 (edited) 3y
maximoffs @Robothugs 😂 it knows the epic friendship that will ensue. GR is terrified 3y
raelaschoenherr I'm raelaschoenherr! 3y
raelaschoenherr https://www.goodreads.com/user/show/6968963-raela 3y
maximoffs @raelaschoenherr added! 3y
Tikabelle Found you! I'm terrible at keeping up with GR but it's a new year and that means starting fresh. 😂 3y
MaleficentBookDragon I'm ChelleRydz 3y
maximoffs @Tikabelle 😂😂😂 added you! @MaleficentTheBookDragon added! 3y
Yellowpigeon Just added you, I'm Lisette! 3y
Yamich49 Added! 3y
Books_and_Nooks Just added you! I'm https://www.goodreads.com/Christin92. 3y
DebinHawaii Just sent you a friend request! 📚👍 3y
MyNamesParadise Sent you a friend request! I haven't set my 2017 challenge yet. I was 10 short for 2016 so it's kind of a sensitive subject right now 😜😜 3y
Lmstraubie Friend request sent ☺ 3y
maximoffs Accepted @Yellowpigeon @Yamich49 @Books_and_Nooks @DebinHawaii @MyNamesParadise @lmstraubie 3y
kobler96 I've never used goodreads to track myself. So I think I'll try it out for a spin ☺I'll find you on there! 3y
70 likes37 comments