The Two Towers: Being the Second Part of The Lord of the Rings
J.R.R. Tolkien
9 users recently

My second wrap up video is up! 6 physical books I read in January! 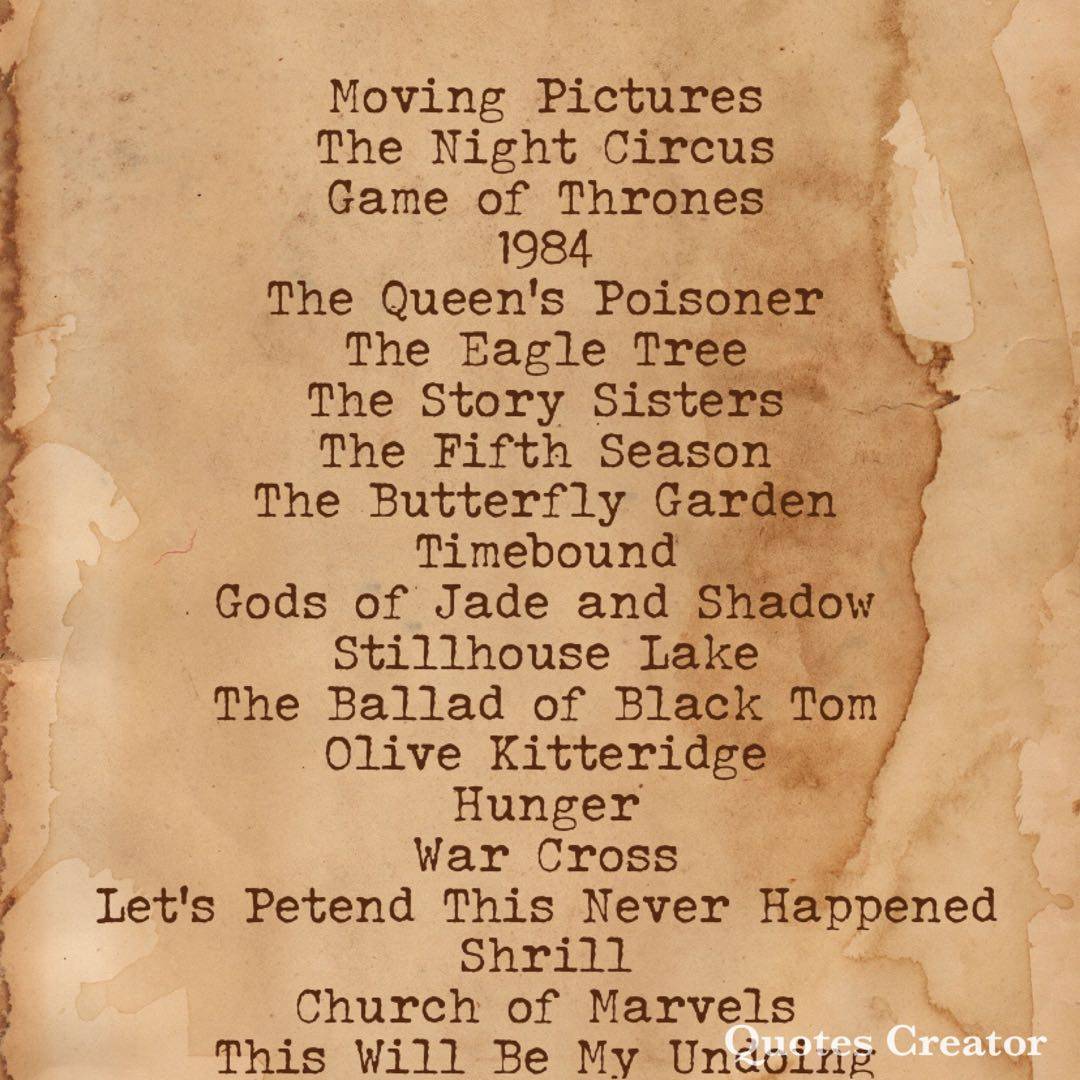 Which will be the lucky one? My list is updated for March #bookspin. @TheAromaofBooks

TheAromaofBooks Woohoo, look at you go with your March list already!! 1d
claudiuo Thank you so much for posting a new list of books. I am so silly, I thought #bookspin is one list of books for the whole year, different numbers drawn each month by @TheAromaofBooks Only now seeing you posted a new list with a new entry added in the place of the already read book, I realized I have to update my list too. Thank you! 1d
TheAromaofBooks @claudiuo - all the numbers will be in play each month, so you can either fill in the blanks with new books, make an entirely new list (which is what I end up doing haha) or you can give some titles double numbers (e.g. since we used 12 this month, you could make your no. 11 book be both 11 and 12, or something like that). It's pretty flexible - this is a low-key challenge!! 8h
claudiuo @TheAromaofBooks This sounds great, thanks for the clarification, it helps a lot. 6h
19 likes4 comments

Fireneko84
The Eye of the World: Book One of 'The Wheel of Time' | Robert Jordan

My husband and I went to the local used bookstore over the weekend. Needless to say, my TBR pile increased lol! Can't wait to get started! #TBRTuesday

Today's #Two4Tuesday is all about favorites. Looking forward to reading your answers. Don't forget to tag me with your answers and as always, Happy Tuesday!

My answers:
1️⃣ Tagged
2️⃣ "Honor is dead, but I'll see what I can do." From Words of Radiance

The Stormlight Archive first came to my attention when Oathbringer was published in 2017. I read a review of it & was intrigued, I decided to try his Mistborn trilogy to see if I would be a fan of his & I was pleasantly surprised by the books. In Mistborn Sanderson upends & subverts fantasy tropes, while also creating some of the greatest characters in contemporary fantasy. Oh, & his world building & magic systems are accessible & top-notch. I👇

vivastory provide all of this info on Mistborn because all of the things that made Mistborn great are, in the words of Spinal Tap, turned up to 11 in Way of Kings. WoK is a very different world & story in many ways from Mistborn, but Sanderson's ability to create interesting characters has continued, as has his ability to twist fantasy tropes. Often in WoK he is bordering Grimdark territory. The world building is astonishing, it's an immersive experience.👇 3d
vivastory Although, the pacing was a bit uneven at times, & he tends to be a bit too wordy. Still, overall a great start to what promises to be one of the most epic of epic fantasy series of our time. 3d
vivastory *I should further note that I'm 💯 aware that my feeling that parts were a bit too wordy are undoubtedly just my opinion. People often make the same charge against S King & I haven't felt that way while reading him. 3d
See All 6 Comments
sprainedbrain Great review! I‘ve had this on my list for so long and I‘m intimidated, but I think I should just read it. 2d
MellieAntoinette @sprainedbrain It‘s sooooo good. The audiobook is very good too! 😉 😉 1d
MellieAntoinette ❤️ ❤️ ❤️ 1d
92 likes6 comments

Branwen
The Great Hunt: Book 2 of the Wheel of Time | Robert Jordan

Leftcoastzen Cute tummy!😻 4d
DaveGreen7777 Greatest prologue ever in this book! 😀 4d
Branwen @Leftcoastzen Yes! He's my fuzzy little baby! 😻 @DaveGreen7777 OMG right?!?! I love this prologue so much! It's so creepy and menacing! 😨 And I love that, for me at least, this is the part of the series where you really start to question who or who isn't a darkfriend. 'I love this character! But wait! Are they a darkfriend? Or black ajah? Who can I trust?' 😱I love that uneasy feeling that lasts for the rest of the series! 4d
See All 7 Comments
DaveGreen7777 Speaking of not knowing who you can trust in the Wheel of Time world, I remember this book also had a great “Holy 💩” moment when a supposed ally was revealed to be a Darkfriend! 😱 4d
Branwen @DaveGreen7777 I CAN'T REMEMBER WHO IT IS! 😱😱😱 4d
DaveGreen7777 @Branwen Oops! I shan‘t say another word about it, then! 😳 4d
UwannaPublishme 😻😻😻 3d
60 likes7 comments

HeyT
The Path Of Daggers: Book 8 of the Wheel of Time | Robert Jordan

I‘m still enjoying this world and it‘s characters. This installment feels a little slow and ends with some cliffhangers but I still had a good time reading. I look forward to the next one.
#TheWheelOfTime
#BuriedAliveChallenge

Branwen
The Eye of the World: Book One of 'The Wheel of Time' | Robert Jordan

I've only got 100 pages left and I'm determined to finish today! Whoo hoo! I'm armed with snacks and tea! 😁 I am really enjoying my reread of this series so far and can't wait to start The Great Hunt! It's so fun to hang out with Rand and the gang again! 📚💕 #wotreread

HeyT I‘m reading the series for the first time and just finished book 8 today. The whole series feels like a comfort read so far. 4d
Branwen @HeyT Yes! I completely agree! Every time I pick this series up it feels so familiar and comfortable! 😀 Who is your favorite character? Has it changed at all as you progress through the series? 4d
HeyT @Branwen so far my fave has been Nynaeve. She‘s so cantankerous and yet really has a good heart underneath her prickles. 4d
56 likes3 comments

xicanti
City of Night: A Novel of the House War | Michelle West

I lucked into an Express copy of THE LAST WISH, so that‘s my short fiction sorted.

I plan to focus on CITY OF NIGHT by Michelle West. If I finish it, or if I need a break, I‘ll start FIFTH QUARTER by Tanya Huff.

I‘ve gotta finish BLACK WRITERS MATTER as it‘s due soon and I can‘t renew it.

I‘ll take another stab at my small comics stack.

And I‘ll push on through the Sagas, because I‘m stubborn.