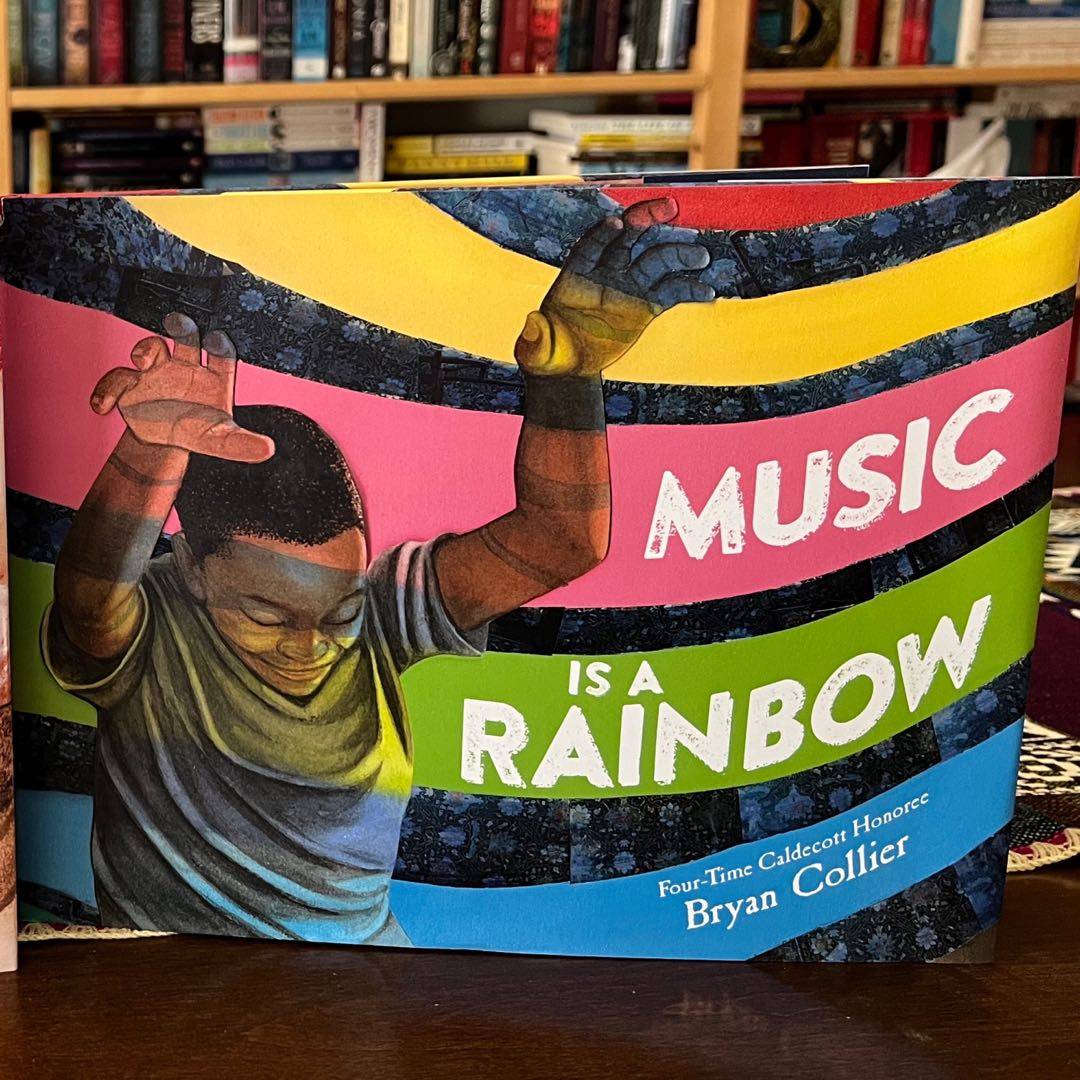 #DivineDecember Day 5: #Carols reminded me of this new picturebook that just arrived in my doorstep. Review is forthcoming.

MatchlessMarie
Would You Rather... | John Burningham 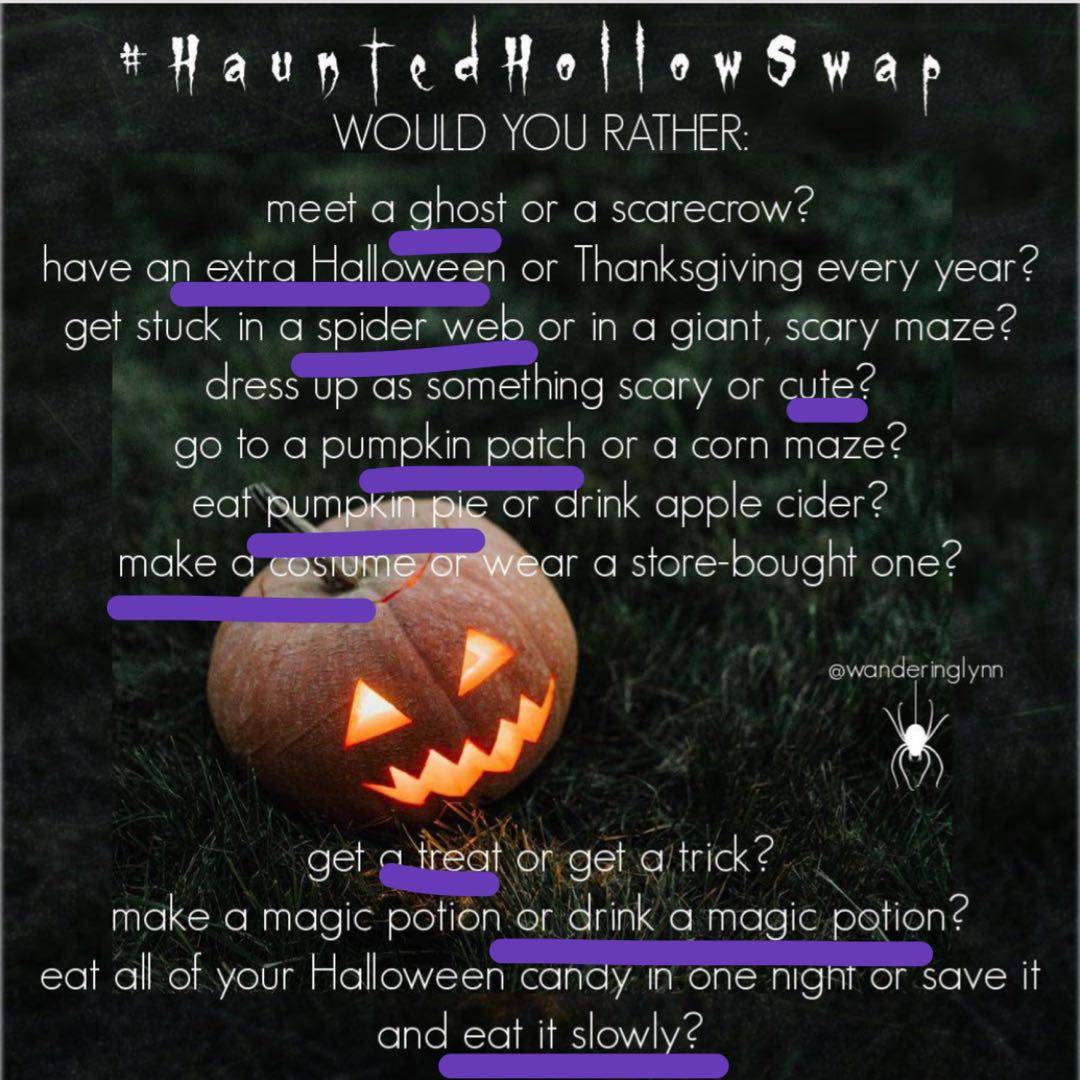 🎃🎃 Maybe scary February should be a thing like Christmas in July 🧟‍♀️💘

🥧 I do love cider though

👗 👠 using “make” loosely. Most of my costume ideas I can‘t find in store. But I do buy each element of the costume. Ex: this year I‘m going to be mummy pig (orange dress, black flats, 🐽)

wanderinglynn
wanderinglynn I love the idea of scary February! 👻🖤🙌🏻 3mo
MatchlessMarie @wanderinglynn maybe if enough people are interested I can attempt to host a #ScaryFebruary readathon or photo challenge in February. Good chance to catch up on these swap hauls 🤔 3mo
wanderinglynn That would be awesome! I‘d totally be on board for that. 3mo
24 likes3 comments

Pigpen_Reads
Would You Rather... | John Burningham

OndinetheSea
Would You Rather... | John Burningham

👻 a ghosty, hopefully a nice one
🎃 Halloween
🧱 a maze
🧛🏻‍♀️ something scary
🎃 pumpkin patch
🍎 apple cider
🧵 make a costume
🍡 treat
⚗️ make a potion
🍬 eat in one night, due to my lack of impulse control

LibrarianRyan
Would You Rather... | John Burningham

TheKidUpstairs
Would You Rather... | John Burningham

#HauntedHollowSwap Would You Rather? with @wanderinglynn
👻 ghost
🎃 extra Halloween for sure!
🕸 getting stuck in anything is terrifying, but I get anxious in mazes if I feel too lost!
🧙‍♀️ can I be scary-cute? Growing up I tended to be something cute-but-dead for Halloween!
🎃 pumpkin patch
🥧 pumpkin pie (unless it's grown up cider 🤣)
👩‍🎤 Store bought (I'm lazy)
🍬 treat
🪄 make a potion
🍫🍬🍭 savour it slowly for sure!

On what should have been a regular morning, Anders, a white cis-hetero man, wakes up to find that his skin colour has changed to a darker tone. He finds this change so unfathomable that for the first few days he refuses to go to work. An absence he is granted rather easily inspite of his boss uttering empty threats like "you better be dead", because, according to his boss, he is still a white cis-hetero man....(continued in comments)

nathandrake1997 ....Anders is so scarred by this change in skin tone that for the first few days, he even refuses to go on a grocery run and instead survives on protein powder. The first person he comes out to about this change is his girlfriend Oona. Now, this coming out provokes an initial reaction of shock but gradually leads to a night of lovemaking.... 3mo
nathandrake1997 ....This "coming out" instance is a comment on how while the tone of his skin colour has changed, he was once a white cis-hetero man and all thanks to his history of being white, the privileges associated with being white isn't something Anders has shed yet.
And that leads me to one of the prominent themes of Mohsin Hamid's latest Kafka-esqe novel THE LAST WHITE MAN. The theme being "privilege". Yes, privilege with double quotes.... 3mo
nathandrake1997 ....Privilege is something which is so generatioanally and ubiquitously ingrained in our society that one feels that one can't notice it anymore unless highlighted. That's what Hamid's novel in a way is about, the highlighting of systematically ingrained privilege.... 3mo
See All 18 Comments
nathandrake1997 ....n order to understand Hamid's act of highlighting, one has to take in context what happens further in the novel. Gradually, more and more white cis-hetero people start changing their skin colour and initially when the ratio between white and "former white" is substantial, riots break out on a regular basis when white people desperately try to retain their "whiteness" and these attempts of retention often escalate to violence.... 3mo
nathandrake1997 ....But once the amount of "former white" people increases to the amount where almost the entire population turns into "former white", the violence dies down, since even though they were now of a different skin colour tone than they previously were, they probably acknowledge the fact that they were once white and hence, this transition to a "darker" skin tone is compatible with their bigoted lenses.... 3mo
nathandrake1997 ....Towards the end of the novel, when Anders and Oona have a child, the only surviving grandparent, Oona's mother, teaches her grandchild about the "virtues of being white", because according to her, while the tone of their skin might have changed, they were still inherently "white" and that according to her is something that should be preserved and passed on to future generations..... 3mo
nathandrake1997 ....Now, this might make one contemplate that the novel exclusively focuses on "white" people and yes Hamid does that, but, maybe I'm reading into this too much, Hamid's intentional "white" focus mirrors the white "first world" focus of the current affairs of our times.... 3mo
nathandrake1997 ....For example, while the heatwave in the United Kingdom made headlines, did we see even a remotely close amount of coverage for the devastating floods in Pakistan? This is one of the many instances where Hamid comments on the state of the world through form.... 3mo
nathandrake1997 ....Talking about form, this is quite a formally innovative novel with its innovations being understated to the point where one might not be aware of it first.... 3mo
nathandrake1997 ....For example, it took me a while to understand that the novel is written in these long, paragraph spanning sentences, because, especially in part one, each of these sentences is crammed with so much "event" that just like the characters, the reader also isn't given breathing space to contemplate what just transpired! 3mo
nathandrake1997 ....This initially gives the impression of the novel being overstuffed. But once part 2 begins and once the "event" driven paragraph spanning sentences give way to the "existential musings" kind of paragraph spanning sentences, the novel becomes a lot more contemplative and gives the reader the space they need to ponder upon what's on the page.... 3mo
nathandrake1997 ....A few sentences back, I called the novel's formal innovations of being of the subtle kind. An example of formal innovation in a subtle manner is the aforementioned lovemaking scene. While the novel is narrated otherwise in a third person manner, during that sequence, Hamid subtly shifts to a second person perspective wherein the prose talks about the reader's reaction to the lovemaking rather than describing the lovemaking itself.... 3mo
nathandrake1997 ....Once the sequence is over, the prose slips back to third person narration and this is done in a manner so spellbindingly seamless that it actually made my jaw drop.... 3mo
nathandrake1997 ....Now, coming back to the paragraph spanning sentences, these sentences feel like the prose equivalent of the visual grammar of a long take in a film. The language feels so inherently cinematic that one can't help but visualise everything from the word go.... 3mo
nathandrake1997 ....While some sentences feel like the chaotic long takes one would find in a Lijo Jose Pellisery or an Alfonso Cuaron film, some sentences feel like a more visually still long take, the kind of which one might find in an Abbas Kiarostami or an Andrei Tarkovsky film.... 3mo
nathandrake1997 ....The first few paragraphs of this write up might make the reader believe that I have given away too much of the plot and I admit, yes I have given away a bit too much, but inorder to provide context while talking about the themes of the novel, I felt it was essential to give parts of the plot away.... 3mo
nathandrake1997 ....Overall, Mohsin Hamid's latest is both topical and formally innovative and a novel I wish had made it to this year's Booker dozen! 3mo
BarbaraBB Very intriguing. I wasn‘t that interested in this book because of @Megabooks review but now I am again! #choices 3mo
13 likes1 stack add18 comments

Finished my oldest #netgalley ARC! I was worried when I realized this was actually a later title in a series but while reading it, i realized that each book is set in the same world but follows diff couples. A cute read but I felt it focused too much on things like family and children, though I loved the pushback on traditional gender roles. Some of the magic was also interesting and I was really curious about learning more. Typical romance tropes

I never really understand these location markers for kindle titles 😂 but this is another of my #netgalley titles I started a few days ago. Didn't get very far but def plan to finish. This is my oldest #AugustArc title 😱 it's only the first chapter but there are many convenient things happening #lgbtq #gay #queer @Clwojick