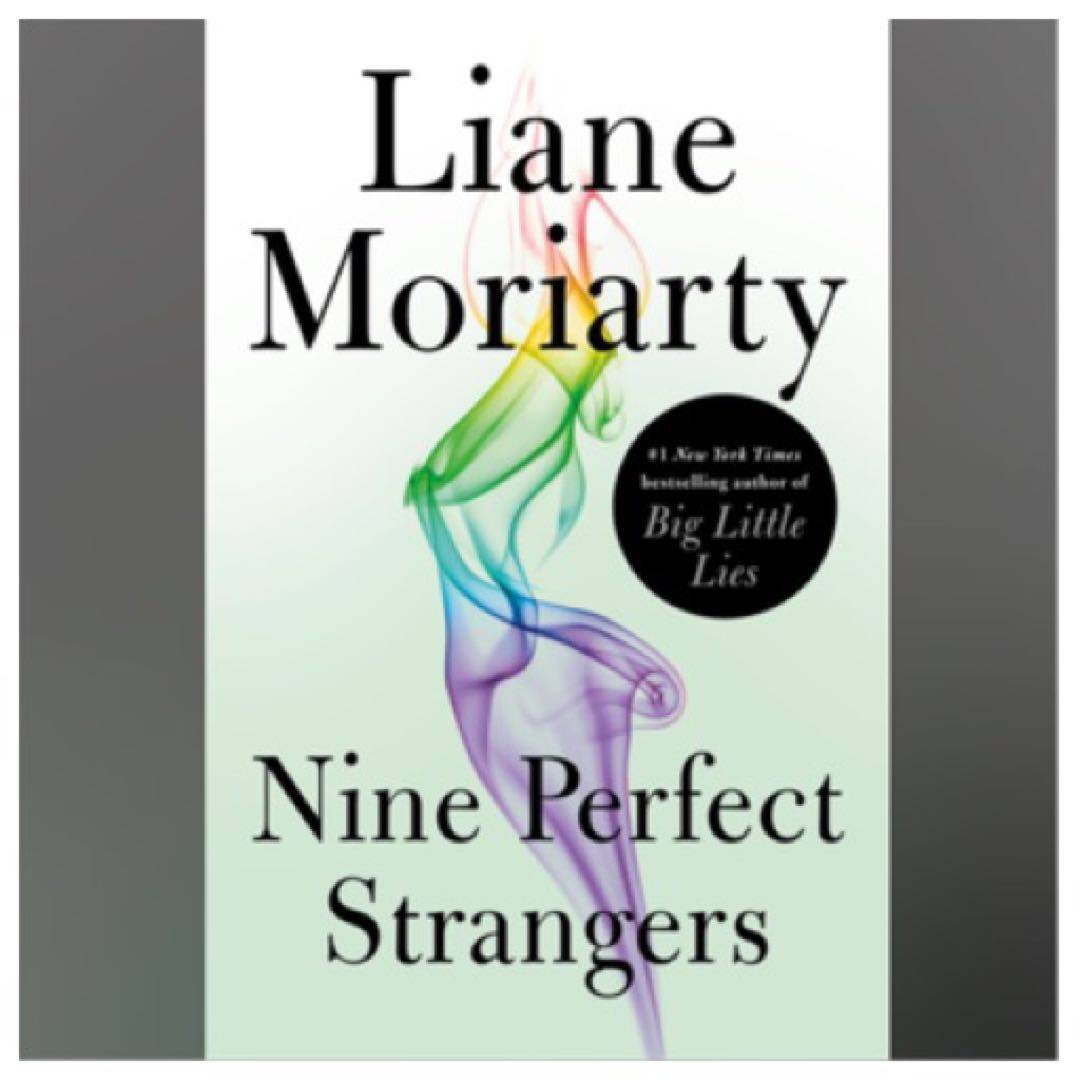 Started this early in the month and wanted to finish it before year‘s end. Nine people are at a remote health resort for 10 days and don‘t realize how their lives will be changed. It started out slow but got very interesting towards the end. This is a character-driven story which led to a tv series. Definitely a study of human behavior. Amusing! 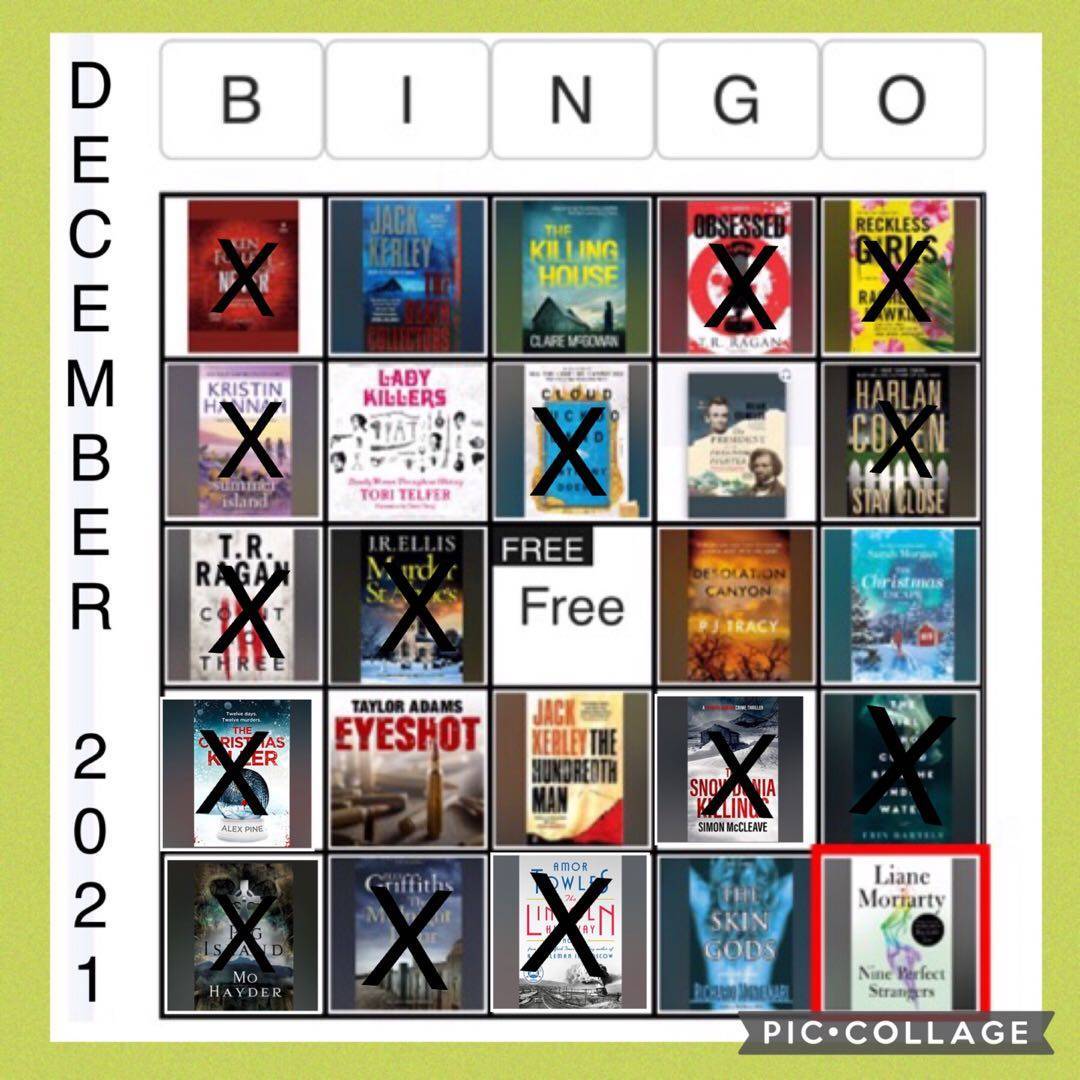 This was a surprisingly cute story. I have noticed that I have been enjoying a lot of younger-aged books lately (hopefully I can recommend some of them to my niece - when the time comes). This book had a great little story of friendship, some mystery, and suspense and just overall adorable!

This is a book about Nora Bridges and her two daughters, Caroline and Ruby, and their mother/daughter relationships. It tells about the situations in the past that separated them and the healing and forgiveness that allowed them to move forward. It is a heartbreaking story so if you read it, don‘t forget the tissues. A Kristin Hannah winner!

“The lowest point of your life can lead to the highest.”
#December2021

Megan Pierce is a soccer mom with two kids and a perfect husband but a bit wild in her younger days. Ray Levine is a documentary photographer and at age forty he finds himself in a dead-end job. Jack Broome is a detective who is working on a cold case of a local husband and father who disappeared 17 years ago.

Tove_Reads, Andrew65, TheAromaofBooks
EadieB These are 3 lives that will crash together and their hidden secrets from the past will explode and they will find out that there is a fine line between one kind of life and another.
I have read most of Coben's books and I love his humor and wit. His characters are always very colorfully-filled with flaws and secrets. His plots are interesting with lots of twists and turns. 5mo
EadieB This one was a bit of a slow-burner and could have been a bit shorter but it did keep me engaged. I was surprised at the killer but there were clues along the way. This book proved once again that Coben is the master of domestic suspense. I look forward to reading some of his other standalones that I haven't read yet. 5mo
Andrew65 Finished mine late last night. 5mo
See All 6 Comments
Andrew65 Not my favourite book by him and not the usual amount of twists. 5mo
EadieB @Andrew65 I agree! 5mo
TheAromaofBooks Woohoo!! 5mo
38 likes1 stack add6 comments

On her first day of kindergarten, five-year-old Tinsley disappeared without a trace. 5 years later, her divorced mother, Dani Callahan, is a private investigator. Quinn Sullivan is her young assistant and both of them are devoted to finding missing loved ones. Dani has been focused to finding Tinsley ever since she went missing 5 years ago.

Andrew65, TheAromaofBooks
EadieB Their newest case is Ali Cross, a teenager who vanished recently from the streets of Sacramento. Thank goodness for a 12 year old boy named Ethan who witnessed the abduction of Ali. What does Ali and Tinsley's abductions have in common is the nagging question that needs to be solved? 5mo
EadieB I'm in the midst of reading Ragan's Lizzy Gardner's series. I love all of the author's characters. Her books are character-driven and all very interesting and well-drawn. I'm finding the same page turning aspects in this book too. She has a way with suspense that makes you feel like you're on a roller coaster with the twists and turns of the plots. 5mo
EadieB I'm now hoping this is a start of a new series and I'm looking forward to reading the next book. If you enjoy mystery thrillers then I'm sure you will enjoy Ragan's books. I would like to thank NetGalley and Thomas and Mercer for a free copy for an honest review. 5mo
See All 6 Comments
Andrew65 Sounds good! 5mo
EadieB @Andrew65 Yes it was! Just published 12/7/21 5mo
TheAromaofBooks Great progress!!! 5mo
42 likes1 stack add6 comments

EadieB
The Girl who Could Breathe Under Water: A Novel | Erin Bartels

Erin Bartels is an awesome writer. She is now on my list of authors who are automatic reads. Kendra Brennan is a novelist who is having trouble writing her 2nd book. She has received a letter from 'A Very Disappointed Reader' who claims that she did not tell the truth in her first book. She is planning to confront Tyler, the man who she wrote about, & prove that she told the truth about what happened at the lake where she spent long-ago summers.

Andrew65, TheAromaofBooks
EadieB Hopefully then she will be able to meet the deadline for her next book.
The book is written in the first person and Kendra is speaking to Cami, her friend and sister of Tyler, who has gone missing. But what Kendra discovers as she delves into the murky past is not what she expected.
(edited) 5mo
EadieB It is a book about friendship, family love, sexual abuse and forgiveness. It is a painful and emotional exploration for Kendra and Erin Bartels, the author, who has experienced sexual abuse herself. I was touched by Erin's message to her readers and hope that she has found some peace from laying her heart on her sleeve and expressing her feelings so beautifully. 5mo
EadieB If you enjoy heartfelt books, then you should definitely read this one. I would like to thank LibraryThing and Revell Publishers for giving me a free copy and the experience of reading and reviewing this book. 5mo
See All 7 Comments
EadieB #TheGirlWhoCouldBreatheUnderwater #ErinBartels #DashingDecember #Readathon #BookSpinBingo #December2021 5mo
TheAromaofBooks Woohoo!! 5mo
Andrew65 Well done 👏👏👏 5mo
EadieB @Andrew65 Thanks! 5mo
48 likes1 stack add7 comments

“You don‘t have to understand life. You just have to live it.”
#December2021

Cloud Cuckoo Land is a masterpiece about a book called Aethon's story. Setting is Constantinople in the 15th century with 13 year-old Anna who is an orphan. In a small town in present-day Idaho, Zeno, an octogenarian, rehearses 5 children in a play adaptation of Aethon's story. And in a not-so-distant future, on the interstellar ship Argos, Konstance is alone in a vault, copying on scraps of sacking the story of Aethon, told to her by her father.

Andrew65, TheAromaofBooks
EadieB Cloud Cuckoo Land is a beautiful and redemptive novel about stewardship of the book, of the Earth, of the human heart. This book switches between these 3 time zones and can get confusing if you don't pay attention to the story. It's a book that you will either love it to be longer or hate it and wish it was shorter. 5mo
EadieB If you love different kinds of genre then I believe you will love this book as I find it to be a mixture of all genres. It definitely will go down in book history as a book you should read before you die! 5mo
EadieB #CloudCuckooLand #AnthonyDoerr #DashingDecember #Readathon #BookSpinBingo #December2021 5mo
See All 12 Comments
EadieB @TheAromaofBooks This is my #BookSpin book. 5mo
Crazeedi three time frames? Different! Have a good day Eadie 5mo
EadieB @Crazeedi Thanks! You too! 5mo
TheAromaofBooks Great review!! 5mo
EadieB @TheAromaofBooks Thanks! 5mo
perfectsinner Just picked up a copy recently, great review! Can't wait to read it. I was kinda on the fence about buying it, hope I enjoy it as much as you 5mo
EadieB @perfectsinner I‘m sure you will! 5mo
Andrew65 Well done 👏👏👏 5mo
EadieB @Andrew65 Thanks! 5mo
56 likes12 comments