My Lobotomy: A Memoir | Charles Fleming, Howard Dully
6 posts | 24 read | 29 to read
At twelve, Howard Dully was guilty of the same crimes as other boys his age: he was moody and messy, rambunctious with his brothers, contrary just to prove a point, and perpetually at odds with his parents. Yet somehow, this normal boy became one of the youngest people on whom Dr. Walter Freeman performed his barbaric transorbital or ice pick lobotomy. Abandoned by his family within a year of the surgery, Howard spent his teen years in mental institutions, his twenties in jail, and his thirties in a bottle. It wasn t until he was in his forties that Howard began to pull his life together. But even as he began to live the normal life he had been denied, Howard struggled with one question: Why? October 8, 1960. I gather that Mrs. Dully is perpetually talking, admonishing, correcting, and getting worked up into a spasm, whereas her husband is impatient, explosive, rather brutal, won t let the boy speak for himself, and calls him numbskull, dimwit, and other uncomplimentary names. There were only three people who would know the truth: Freeman, the man who performed the procedure; Lou, his cold and demanding stepmother who brought Howard to the doctor s attention; and his father, Rodney. Of the three, only Rodney, the man who hadn t intervened on his son s behalf, was still living. Time was running out. Stable and happy for the first time in decades, Howard began to search for answers. December 3, 1960. Mr. and Mrs. Dully have apparently decided to have Howard operated on. I suggested [they] not tell Howard anything about it. Through his research, Howard met other lobotomy patients and their families, talked with one of Freeman s sons about his father s controversial life s work, and confronted Rodney about his complicity. And, in the archive where the doctor s files are stored, he finally came face to face with the truth. Revealing what happened to a child no one not his father, not the medical community, not the state was willing to protect, " My Lobotomy" exposes a shameful chapter in the history of the treatment of mental illness. Yet, ultimately, this is a powerful and moving chronicle of the life of one man. Without reticence, Howard Dully shares the story of a painfully dysfunctional childhood, a misspent youth, his struggle to claim the life that was taken from him, and his redemption. "From the Hardcover edition."" 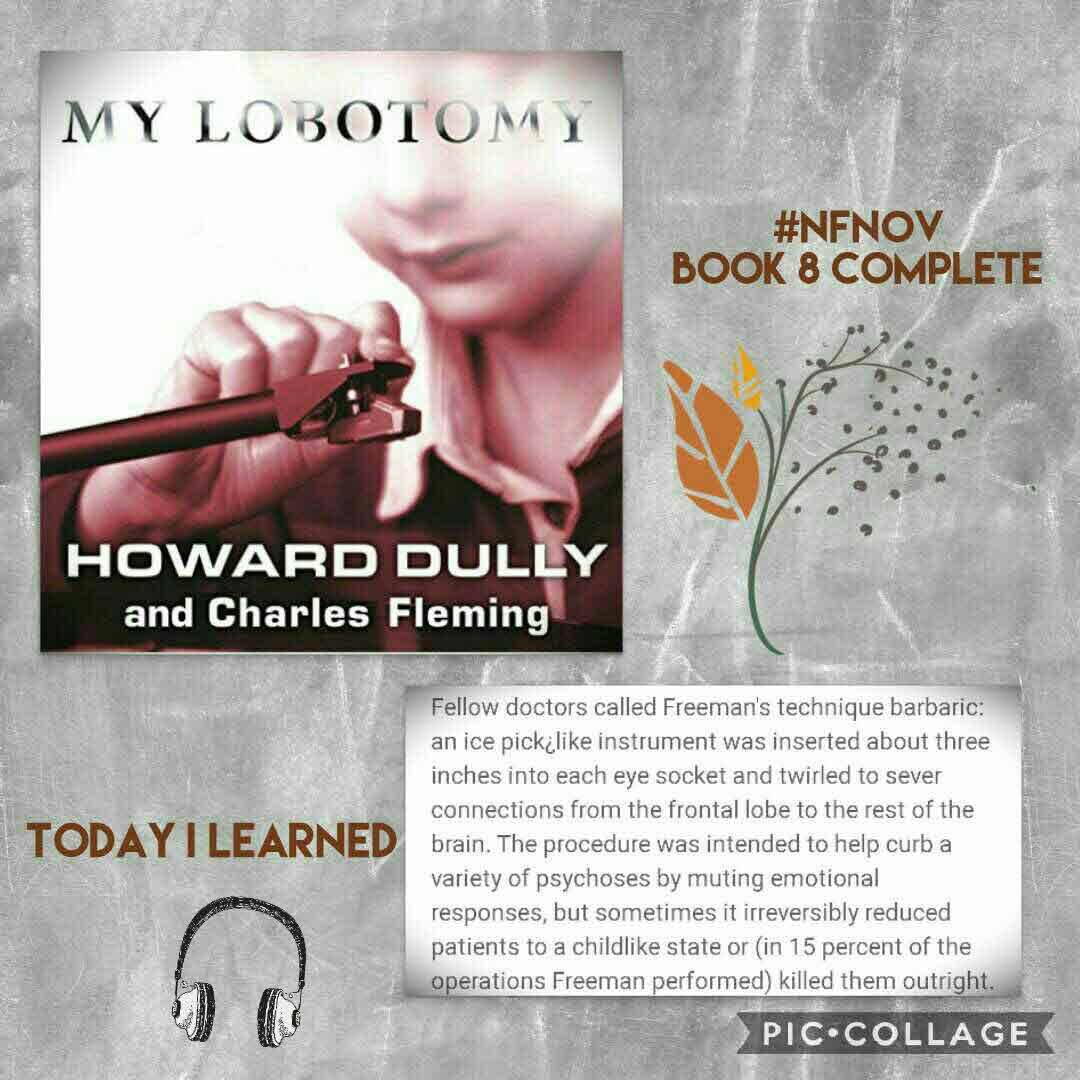 #NFNov Book 8 complete ⭐⭐⭐⭐
#TIL *see above
A shocking Memoir of one of America's youngest victims of lobotomy. Sadly most of his behavior problems were caused by bad parenting.😱
@rsteve388 @Clwojick 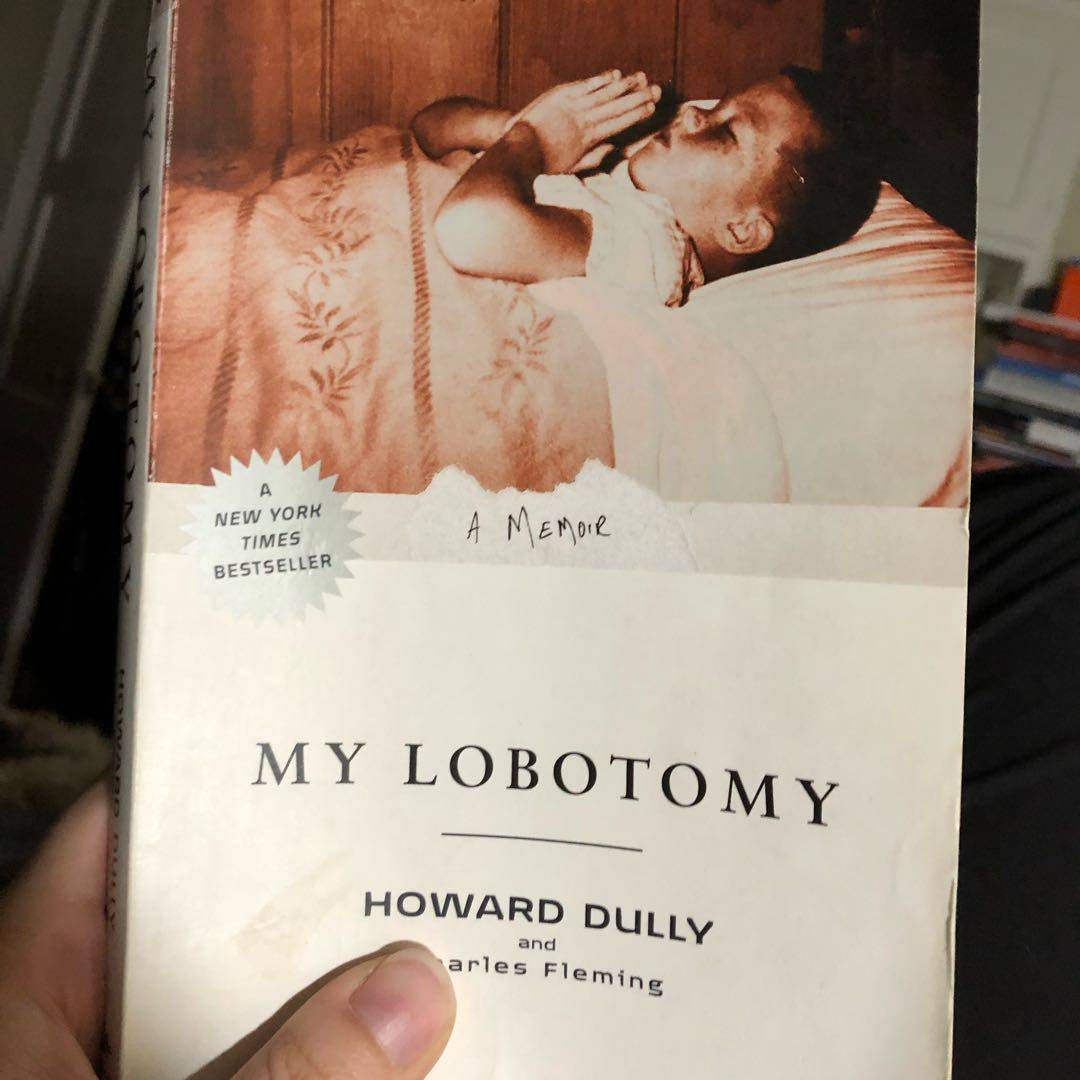 I couldn‘t put it down. Such a brave story to tell about his torture and abuse at home that led to a lobotomy and later incarceration in mental hospitals. Worst part is...he was never crazy. Fascinating story based right here in my backyard of San Jose. 👏🏻👏🏻👏🏻

It seems incredible to me that this sort of thing happened not so very long ago - and that people like the author lived to tell their stories.

Cinfhen
LibrarianRyan This sounds fascinating. 2y
Cinfhen This sounds so sad 💔 2y
saresmoore Weeeeird. I agree that it sounds both fascinating and sad! 2y
See All 21 Comments
readordierachel It's crazy to think about some of the barbarism that has passed for medical treatment. What a heartbreaking story. 2y
batsy 😖 2y
LauraJ Sounds fascinating 😲 2y
britt_brooke Whoa. #stacked 2y
Izai.Amorim I didn't know that someone could write a book after a lobotomy. I thought it would turn someone into a moron. Must research this.🤔 2y
rubyslippersreads Horrible! The only book I've ever read that dealt with this was

Will There Really be a Morning?: An Autobiography
2y
LeahBergen @LibrarianRyan It does, doesn't it? 2y
LeahBergen @Cinfhen I know! 😬 2y
LeahBergen @saresmoore Yes, it does and I haven't quite managed to pull it off the TBR yet. 😬 2y
LeahBergen @ReadOrDieRachel And not that long ago either. 2y
LeahBergen @batsy Yep! 2y
LeahBergen @LauraJ Yes, horribly so! 2y
LeahBergen @britt_brooke That's what I said when I spotted it at a book sale! 2y
LeahBergen @Izai.Amorim The surgery had a wide range of outcomes, I guess. Some people died from it and others ended up with only slight emotional and cognitive impairment. It's so bizarre! 2y
LeahBergen @rubyslippersreads I remember my parents discussing Frances Farmer (and watching a movie about her). There was some sort of controversy about whether she really had a lobotomy or not, I think? 2y
rubyslippersreads @LeahBergen There was a movie about her with Jessica Lange. Both the book and movie left me with the impression that she had a lobotomy, but now I'm curious. 2y
[DELETED] 3803335244 This is so sad & brave. Definitely adding this to my list. 2y
Suet624 Well now I have to find this book. I thought I had a rough childhood! 2y
94 likes21 stack adds21 comments

This is a tool (essentially an ice pick), that was used to perform the lobotomy performed on the author above when he was 12--changed his life! Called transorbital lobotomy where the frontal lobe is accessed through eye sockets
Incredible story

Stopped at the bookstore to use a gift card last night. I love the clearance section at Half Price Books.

EvieBee So do I! I could camp out there. 3y
79 likes1 stack add1 comment

This book made me cringe. I really had a hard time getting through it. It's well-written and certainly interesting, but very difficult to stomach.